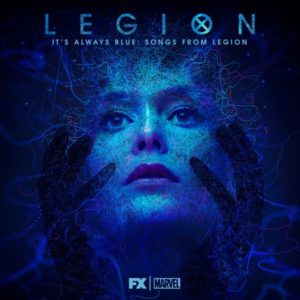 Lakeshore Records released It’s Always Blue: Songs From Legion digitally on August 17, presenting cover versions of classic songs featured in the critically-acclaimed drama series performed by EMMY Award-winning composer Jeff Russo (Fargo, Star Trek: Discovery) and Peabody Award-winning series Creator/Executive Producer Noah Hawley. Noah literally named one of his characters Syd Barrett and cited Dark Side of the Moon as one of the creative influences for the show. Hence, the show is full of cover versions of rock songs he wanted to showcase for thematic reasons. Reimagined tracks, such as “Behind Blue Eyes” and “Don’t Come Around Here No More” showcase Hawley on lead vocals and Russo on harmony vocals in addition to playing all other instruments, including the Moog Synthesizer IIIc. Legion is set to return to FX for a third season in 2019.

Check out a full tracklist below:

Burning Down the House 4:37